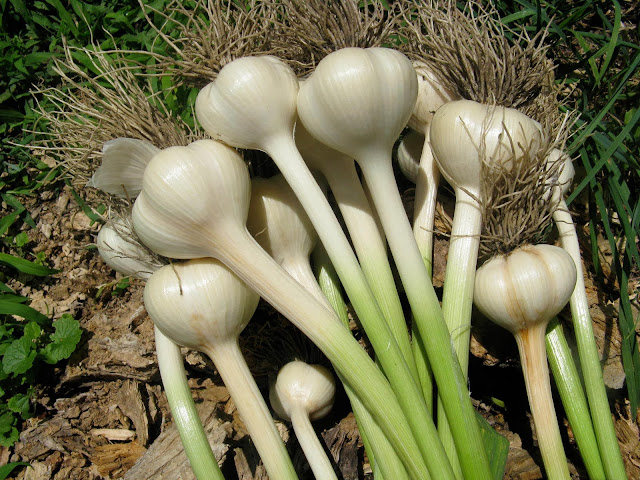 Their work was published recently in the Journal of Antimicrobial  Chemotherapy a follow-up to the author’s previous research in Applied  and Environmental Microbiology which conclusively demonstrated that  garlic concentrate was effective in inhibiting the growth of C. jejuni  bacteria.

Garlic is probably nature’s most potent food. It is one of the reasons  people who eat the Mediterranean diet live such long healthy lives.  Garlic is also a powerful performer in the research lab.

This work is very exciting to me because it shows that this compound has  the potential to reduce disease-causing bacteria in the environment and  in our food supply,” said Xiaonan Lu, a postdoctoral researcher and  lead author of the paper.

One of the most interesting of the recent findings is that garlic  increases the overall antioxidant levels of the body. Scientifically  known as Allium sativa, garlic has been famous throughout history for  its ability to fight off viruses and bacteria. Louis Pasteur noted in  1858 that bacteria died when they were doused with garlic. From the  Middle Ages on, garlic has been used to treat wounds, being ground or  sliced and applied directly to wounds to inhibit the spread of  infection. The Russians refer to garlic as Russian penicillin.

“This is the first step in developing or thinking about new intervention  strategies,” saif Michael Konkel, a co-author who has been  researchingCampylobacter jejuni for 25 years.

Campylobacter is simply the most common bacterial cause of food-borne  illness in the United States and probably the world,” Konkel said. Some  2.4 million Americans are affected every year, according to the U.S.  Centers for Disease Control and Prevention, with symptoms including  diarrhea, cramping, abdominal pain and fever.

The bacteria also are responsible for triggering nearly one-third of the  cases of a rare paralyzing disorder known as Guillain-Barre syndrome.

Diallyl disulfide is an organosulfur compoundcompound derived from  garlic and a few other genus Allium plants. It is produced during the  decomposition of allicin, which is released upon crushing garlic.

Lu and his colleagues looked at the ability of diallyl sulfide to kill  the bacterium when it is protected by a slimy biofilm that makes it  1,000 times more resistant to antibiotics than the free floating  bacterial cell. They found the compound can easily penetrate the  protective biofilm and kill bacterial cells by combining with a  sulfur-containing enzyme, subsequently changing the enzyme’s function  and effectively shutting down cell metabolism.

The researchers found the diallyl sulfide was as effective as 100 times  as much of the antibiotics erythromycin and ciprofloxacin and often  would work in a fraction of the time.

“Diallyl sulfide may be useful in reducing the levels of the  Campylobacterin the environment and to clean industrial food processing  equipment, as the bacterium is found in a biofilm in both settings,”  Konkel said.

“Diallyl sulfide could make many foods safer to eat,” said Barbara  Rasco, a co-author on all three recent papers and Lu’s advisor for his  doctorate in food science. “It can be used to clean food preparation  surfaces and as a preservative in packaged foods like potato and pasta  salads, coleslaw and deli meats.”

“This would not only extend shelf life but it would also reduce the  growth of potentially bad bacteria,” she said.

The natural substance could also be derived without artificially  introducing harmful chemicals to disruptive its disease-reducing  abilities.

Ironically, many researchers think that antibiotics may be just one of  several factors that contribute to intestinal blockage in young  children.

Author : April McCarthy is a community journalist playing an active role  reporting and analyzing world events to advance our health and  eco-friendly initiatives.

Source:  wakingtimes.com
Posted by Palmer at 10:16 AM