Glenview Historic District Is A Neighborhood In Memphis, TN

Glenview Historic District is a neighborhood in Memphis, Tennessee that was listed on the National Register of Historic Places as a historic district in 1999.The neighborhood is between South Memphis and Midtown and bounded by the Illinois Central Railroad on the west, Lamar Ave on the east, Southern Ave on the north and South Parkway on the south.

Glenview was one of several suburban residential subdivisions in Memphis that were created during a building boom in the early 20th century. Architecture is representative of suburban development of that period, including bungalows, cottages, Foursquare, Colonial, Dutch Colonial Tudor and Spanish Revival styles.

Glenview has many well-kept houses and is majority African American. It is also home to Eternal Peace Missionary Baptist Church, The Willet Apartments and Glenview Community Center. Home sizes range from about 1,000 square feet (93 m2) to 3,000 square feet (280 m2).

Source: wikipedia.com
Posted by Palmer at 4:33 PM No comments:

Email ThisBlogThis!Share to TwitterShare to FacebookShare to Pinterest
Labels: Glenview Historic District is a neighborhood in Memphis, TN

The Anderson-Coward House, also known as Justine's Restaurant, is a historic mansion in Memphis, Tennessee, USA.

The mansion was built circa 1852 for Nathaniel Anderson, a planter. It was designed in the Italianate architectural style. It was purchased by H.M. Grosvenor, until it was acquired by William C. Coward as debt settlement. It was passed on to his son, William Holliday Coward. After his death in the early 1900's, it was inherited by his daughter Ida and her husband, Robert O. Johnston, a lawyer and banker.

The mansion was repurposed as a restaurant in 1958.

Source: wikipedia.com
Posted by Palmer at 4:23 PM No comments: 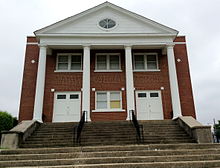 Front of the church
It is a rectangular brick building with brick laid in common bond. It has a limestone fence separating its parking area from the street, which is a c.1890 fence from the former Second Empire-styled Sanford house on the property.

It was listed on the National Register of Historic Places in 2000. It was deemed significant for its association with Thomas Oscar Fuller (1867-).

Source: wikipedia.com
Posted by Palmer at 4:20 PM No comments:

This home is located off of Peabody Avenue in Memphis in the Annesdale Neighborhood in Memphis TN.

This is another home that is located on Peabody Avenue in the same neighborhood. It is called a foursquare style home.

You will also find in this neighborhood the oldest Cemetery in Memphis. This is where many of the Confederate Soldiers are buried as well as the Yellow Fever Victims.

This is the Church Tomb, located in Elmood Cemetery. Robert Church was one of the first Black Millionaires in Memphis.

Posted by Palmer at 4:18 PM No comments: