Breaking News: Country music legend Merle Haggard, who was known for hits like "Okie From Muskogee" and "Mama Tried," died on his 79th birthday. 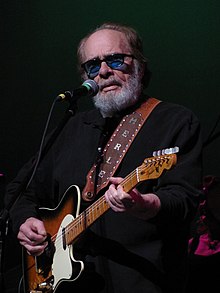 Merle Haggard in concert in Athens, Georgia, in 2013


Merle Ronald Haggard (April 6, 1937 – April 6, 2016) was an American country music songwriter, singer, guitarist,fiddler, and instrumentalist. Along with Buck Owens, Haggard and his band the Strangers helped create the Bakersfield sound, which is characterized by the twang of Fender Telecaster and the unique mix with the traditional country steel guitar sound, new vocal harmony styles in which the words are minimal, and a rough edge not heard on the more polished Nashville sound recordings of the same era.
By the 1970's, Haggard was aligned with the growing outlaw country movement, and he continued to release successful albums through the 1990's and into the 2000's. In 1994, he was inducted into the Country Music Hall of Fame. In 1997, he was inducted into the Oklahoma Music Hall of Fame.
Early Life:
Haggard's parents, Flossie Mae (Harp) and James Francis Haggard, moved to California from their home inChecotah, Oklahoma, during the Great Depression, after their barn burned in 1934. They settled with their children, Lowell and Lillian, in an apartment in Bakersfield, while James started working for the Santa Fe Railroad. A woman who owned a boxcar, which was placed in Oildale, a nearby town north of Bakersfield, asked Haggard's father about the possibility of converting it into a house. He remodeled the boxcar, and soon after moved in, also purchasing the lot, where Merle Ronald Haggard was born on April 6, 1937.[The property was eventually expanded by building a bathroom, a second bedroom, a kitchen and a breakfast nook in the adjacent lot.
His father died of a brain hemorrhage in 1945, an event that deeply affected Haggard during his childhood, and the rest of his life. To support the family, his mother worked as a bookkeeper. His brother, Lowell, gave Haggard his used guitar as a gift when he was 12 years old. Haggard learned to play alone, with the records he had at home, influenced by Bob Wills, Lefty Frizzell and Hank Williams. As his mother was absent due to work, Haggard became progressively rebellious. His mother sent him for a weekend to a juvenile detention center to change his attitude, which worsened.
Haggard committed a number of minor offences, such as thefts and writing bad checks. He was sent to a juvenile detention center for shoplifting in 1950. When he was 14, Haggard ran away to Texas with his friend Bob Teague. He rode freight trains and hitchhiked throughout the state. When he returned the same year, he and his friend were arrested for robbery. Haggard and Teague were released when the real robbers were found. Haggard was later sent to the juvenile detention center, from which he and his friend escaped again to Modesto, California. He worked a series of laborer jobs, including driving a potato truck, being a short order cook, a hay pitcher, and an oil well shooter. His debut performance was with Teague in a Modesto bar named "Fun Center," being paid US$5, with free beer. He returned to Bakersfield in 1951, and was again arrested for truancy and petty larceny and sent to a juvenile detention center. After another escape, he was sent to the Preston School of Industry, a high-security installation. He was released 15 months later, but was sent back after beating a local boy during a burglary attempt. After his release, Haggard and Teague saw Lefty Frizzell in concert. After hearing Haggard sing along to his songs backstage, Frizzell refused to sing unless Haggard would be allowed to sing first. He sang songs that were well received by the audience. Due to the positive reception, Haggard decided to pursue a career in music. While working as a farmhand or in oil fields, he played in nightclubs. He eventually landed a spot on the local television show Chuck Wagon, in 1956.[8]
Married and plagued by financial issues, he was arrested in 1957 shortly after he tried to rob a Bakersfield roadhouse. He was sent to Bakersfield Jail, and was transferred after an escape attempt to San Quentin Prison, on February 21, 1958. While in prison, Haggard discovered that his wife was expecting a child from another man, which pressed him psychologically. He was fired from a series of prison jobs, and planned to escape along with another inmate nicknamed "Rabbit". Haggard was convinced not to escape by fellow inmates. Haggard started to run a gambling and brewing racket with his cellmate. After he was caught drunk, he was sent for a week to solitary confinement where he encountered Caryl Chessman, an author and death row inmate. Meanwhile, "Rabbit" had successfully escaped, only to shoot a police officer and return to San Quentin for execution. Chessman's predicament, along with the execution of "Rabbit," inspired Haggard to turn his life around. Haggard soon earned a high school equivalency diploma and kept a steady job in the prison's textile plant, while also playing for the prison's country music band, attributing a 1958 performance by Johnny Cash at the prison as his main inspiration to join it. He was released from San Quentin on parole in 1960.
According to Rolling Stone, "In 1972, then-California governor Ronald Reagan expunged Haggard's criminal record, granting him a full pardon."
Early Career: 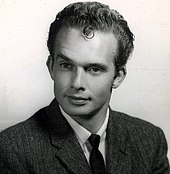 Haggard depicted on a publicity portrait for Tally Records (1961, age 24).
Upon his release, Haggard started digging ditches and wiring houses for his brother. Soon he was performing again, and later began recording with Tally Records. The Bakersfield Sound was developing in the area as a reaction against the over-produced honky tonkof the Nashville Sound. Haggard's first song was "Skid Row". In 1962, Haggard wound up performing at a Wynn Stewart show in Las Vegas and heard Wynn's "Sing a Sad Song". He asked for permission to record it, and the resulting single was a national hit in 1964. The following year he had his first national top ten record with "(My Friends Are Gonna Be) Strangers", written by Liz Anderson(mother of country singer Lynn Anderson) and his career was off and running. In his 1981 autobiography Merle Haggard: Sing Me Back Home, Haggard recalls having been talked into visiting Anderson—a woman he didn't know—at her house to hear her sing some songs she had written. "If there was anything I didn't wanna do, it was sit around some danged woman's house and listen to her cute little songs. But I went anyway. She was a pleasant enough lady, pretty, with a nice smile, but I was all set to be bored to death, even more so when she got out a whole bunch of songs and went over to an old pump organ...There they were. My God, one hit right after another. There must have been four or five number one songs there..." In 1966, Haggard recorded his first number-one song "I'm a Lonesome Fugitive", also written by Liz Anderson, which became his first #1 single. When Anderson played the song for Haggard, she was unaware of his prison stretch. "I guess I didn't realize how much the experience at San Quentin did to him, 'cause he never talked about it all that much," Bonnie Owens, Haggard's backup singer and then-wife, is quoted by music journalist Daniel Cooper in the liner notes to the 1994 retrospective Down Every Road. "I could tell he was in a dark mood...and I said, 'Is everything okay?' And he said, 'I'm really scared.' And I said, 'Why?' And he said, 'Cause I'm afraid someday I'm gonna be out there...and there's gonna be some convict...some prisoner that was in there the same time I was in, stand up—and they're gonna be about the third row down—and say, 'What do you think you're doing, 45200?'" Cooper notes that the news had little effect on Haggard's career: "It's unclear when or where Merle first acknowledged to the public that his prison songs were rooted in personal history, for to his credit, he doesn't seem to have made some big splash announcement. In a May 1967 profile in Music City News, his prison record is never mentioned. But in July 1968, in the very same publication, it's spoken of as if it were common knowledge."
The 1966 album Branded Man kicked off an incredible artistic run for Haggard; in 2013 Haggard biographer David Cantwell states, "The immediate successors toI'm a Lonesome Fugitive—Branded Man in 1967 and, in '68, Sing Me Back Home and The Legend of Bonnie and Clyde—were among the finest albums of their respective years." Haggard's new recordings largely centered around Roy Nichols's Telecaster, Ralph Mooney's steel guitar, and the harmony vocals provided by Bonnie Owens. At the time of Haggard's first top-ten hit "(My Friends Are Gonna Be) Strangers" in 1965, Owens was actually the better known performer, a fixture on the Bakersfield club scene who had recorded and appeared on television. Bonnie, who had been married to Buck Owens, won the new Academy of Country Music's first ever award for Female Vocalist after her 1965 debut album, Don't Take Advantage of Me, hit the top five on the country albums chart. However, there were no more hit singles, and although Owens recorded six solo albums on Capitol between 1965 and 1970, she became mainly known for her background harmonies on Haggard hits like "Sing Me Back Home" and "Branded Man." Producer Ken Nelson took a hands-off approach to producing Haggard. In the episode ofAmerican Masters dedicated to him, Haggard remembers: "The producer I had at that time, Ken Nelson, was an exception to the rule. He called me 'Mr. Haggard' and I was a little twenty-four, twenty-five year old punk from Oildale...He gave me complete responsibility. I think if he'd jumped in and said, 'Oh, you can't do that,' it would've destroyed me." In the documentary series Lost Highway, Nelson recalls, "When I first started recording Merle, I became so enamored with his singing that I would forget what else was going on, and I suddenly realized, 'Wait a minute, there's musicians here you've got to worry about!' But his songs—he was a great writer." Towards the end of the decade, Haggard went on a songwriting tear, composing several #1 hits as "Mama Tried," "The Legend of Bonnie and Clyde," "Hungry Eyes," and "Sing Me Back Home." Daniel Cooper calls "Sing Me Back Home," "a ballad that works on so many different levels of the soul it defies one's every attempt to analyze it." In a 1977 interview in Billboard with Bob Eubanks, Haggard reflected, "Even though the crime was brutal and the guy was an incorrigible criminal, it's a feeling you never forget when you see someone you know make that last walk. They bring him through the yard, and there's a guard in front and a guard behind—that's how you know a death prisoner. They brought Rabbit out...taking him to see the Father,...prior to his execution. That was a strong picture that was left in my mind." In 1968, Haggard's first tribute LP Same Train, Different Time: A Tribute to Jimmie Rodgers, was released to acclaim.
Number One Hits:

Posted by Palmer at 2:38 PM No comments: