Father, look up, and see that flag!
How gracefully it flies!
Those pretty stripes, they seem to be
A rainbow in the skies.

It is your country's flag my boy,
And proudly drinks the light,
O'er ocean's wave, in foreign climes,
A symbol of our might.

Father, what fearful noise is that,
Now thundering in the clouds?
Why do they, cheering, wave their hat,
And rush along in crowds?

It is the voice of cannonry,
The glad shouts of the free

,
This is a day of memory,
'Tis FREEDOM'S JUBILEE!

I wish that I was now a man,
I'd free my country too,
And cheer as loudly as the rest,
But Father, why don't you?

I'm getting old and weak, but still,
My heart is big with joy,
I've witnessed many a day like this,
Shout you aloud, my boy!

HURRAY FOR FREEDOM'S JUBILEE,
God bless our native land,
And may I live to hold the boon
Of freedom in my hand.

Well done my boy, grow up and love,
The land that gave you birth,
A land where freedom loves to dwell...
A paradise on earth!

Posted by Palmer at 1:07 PM No comments:

Email ThisBlogThis!Share to TwitterShare to FacebookShare to Pinterest
Labels: The American Boy


This cannot go around too much. Those of us that were living in those years will never forget that she was a traitor and did a lot of damage to our boys.


She has now been chosen to play Nancy Reagan in her life story.

I am sending this one out because so many do not know this truth...

and also because she was on 3 times this week talking about her new book...

And how good she feels in her 70's... she still does not know what she did wrong..her book just may not make the best list if more people knew...
also...

Thank you all. Many died in Vietnam for our freedoms.

She can lead her present life the way she wants and perhaps SHE can forget the past, but we DO NOT have to stand by without comment and see her "honored" as a "Woman of the Century".

(I remember this well)

For those who served and/or died. . .

NEVER FORGIVE A TRAITOR. SHE REALLY WAS A TRAITOR!!
and now President OBAMA wants to honor her......!!!!

In Memory of LT. C.Thomsen Wieland who spent 100 days at the Hanoi Hilton [Famous North Vietnam Prison].
IF YOU NEVER FORWARDED ANYTHING IN YOUR LIFE FORWARD THIS SO THAT EVERYONE WILL KNOW!!!!!!

A TRAITOR IS ABOUT TO BE HONORED.
KEEP THIS MOVING ACROSS AMERICA

This is for all the kids born in the 70's and after who do not remember, and didn't have to bear the burden that our fathers, mothers and older brothers and sisters had to bear.

Jane Fonda is being honored as one of the '100 Women of the Century.'

Unfortunately, many have forgotten and still countless others have never known how Ms. Fonda betrayed not only the idea of our country, but specific men who served and sacrificed during the Vietnam War.

The first part of this is from an F-4E pilot.

The pilot's name is Jerry Driscoll, a River Rat.

In 1968, the former Commandant of the USAF Survival School was a POW in Ho Lo Prison the 'Hanoi Hilton.'

Dragged from a stinking cesspit of a cell, cleaned, fed, and dressed in clean PJ's, he was ordered to describe for a visiting American 'Peace Activist' the 'lenient and humane treatment' he'd received.

He spat at Ms. Fonda, was clubbed, and was dragged away. During the subsequent beating, he fell forward on to the camp Commandant 's feet, which sent that officer berserk.

In 1978, the Air Force Colonel still suffered from double vision (which permanently ended his flying career) from the Commandant's frenzied application of a wooden baton.

From 1963-65, Col. Larry Carrigan was in the 47FW/DO (F-4E's). He spent 6 years in the ' Hanoi Hilton'...the first three of which his family only knew he was 'missing in action'. His wife lived on faith that he was still alive. His group, too, got the cleaned-up, fed and clothed routine in preparation for a 'peace delegation' visit.

They, however, had time and devised a plan to get word to the world that they were alive and still survived. Each man secreted a tiny piece of paper, with his Social Security Number on it, in the palm of his hand. When paraded before Ms. Fonda and a cameraman, she walked the line, shaking each man's hand and asking little encouraging snippets like: 'Aren't you sorry you bombed babies?' and 'Are you grateful for the humane treatment from your benevolent captors?' Believing this HAD to be an act, they each palmed her their sliver of paper.

She took them all without missing a beat.. At the end of the line and once the camera stopped rolling, to the shocked disbelief of the POW's, she turned to the officer in charge and handed him all the little pieces of paper...

Three men died from the subsequent beatings. Colonel Carrigan was almost number four but he survived, which is the only reason we know of her actions that day.

I was a civilian economic development adviser in Vietnam , and was captured by the North Vietnamese communists in South Vietnam in 1968, and held prisoner for over 5 years.

I spent 27 months in solitary confinement; one year in a cage in Cambodia ; and one year in a 'black box' in Hanoi . My North Vietnamese captors deliberately poisoned and murdered a female missionary, a nurse in a leprosarium in Banme Thuot , South Vietnam , whom I buried in the jungle near the Cambodian border. At one time, I weighed only about 90 lbs. (My normal weight is 170 lbs)
We were Jane Fonda's 'war criminals....'

When Jane Fonda was in Hanoi , I was asked by the camp communist political officer if I would be willing to meet with her. I said yes, for I wanted to tell her about the real treatment we POW's received... and how different it was from the treatment purported by the North Vietnamese, and parroted by her as 'humane and lenient'.

Because of this, I spent three days on a rocky floor on my knees, with my arms outstretched with a large steel weight placed on my hands, and beaten with a bamboo cane.

I had the opportunity to meet with Jane Fonda soon after I was released. I asked her if she would be willing to debate me on TV. She never did answer me.

There are few things I have strong visceral reactions to, but Hanoi Jane's participation in blatant treason, is one of them. Please take the time to forward to as many people as you possibly can.. It will eventually end up on her computer and she needs to know that we will never forget.

Email ThisBlogThis!Share to TwitterShare to FacebookShare to Pinterest
Labels: Traitor 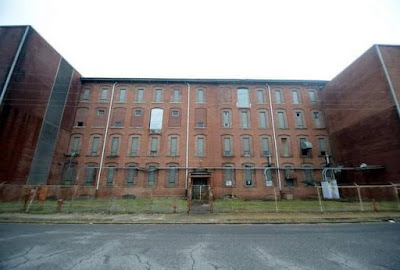 Bemis Mill in Jackson TN faces demolition. - Cotton mill town named Bemis constructed in 1900. Efforts by citizens to save the historic Bemis Mill have taken many forms including a protest rally at the Museum that produced hundreds of signatures on petitions turned over the City Council of Jackson. The mill is listed on the National Historic Register. When placing the Bemis property that included the mill on the Local Historic Register, a survey was done. However before the application was submitted, the mill building was taken off by a city employee who determined it should be considered commercial property and not historical property. This was done without notification to the Bemis Historical Society. Jackson Mayor Jerry Gist and Christian Morton, a co-owner of Bemis Mill LLC, met early Wednesday, 4/2/2014, to discuss the fate of the Bemis Cotton Mill and what it would take to save the old building from deconstruction. After negotiation, it was decided that the city will have two weeks to find investors to buy the mill, or deconstruction will begin. Learn more about this historic landmark visit: http://www.bemishistory.org/
Posted by Palmer at 1:08 PM No comments: