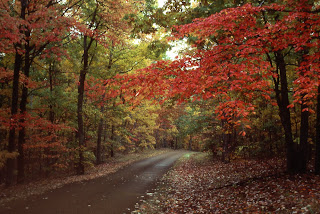 This fall foliage picture was taken along the Mississippi section of the Natchez Trace Parkway.

In middle to late October, the maple, hickory, oak and other hardwood trees begin to change colors and visitors have the opportunity to view the brilliant fall foliage along the Natchez Trace Parkway.

Fall color - one of the most spectacular shows on earth - is a natural phenomena. And while fall color doesn't happen everywhere, it takes place around the same time each year where it occurs.

Trees make sugar from the energy of the sun through a process called photosynthesis.

Chlorophyll, the green pigment in leaves, absorbs the energy trees need to photosynthesize. 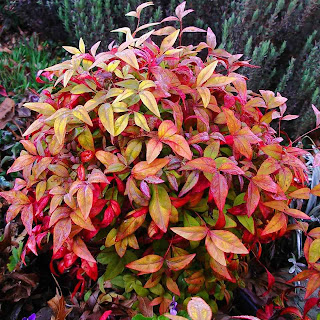 As fall approaches the weather cools and something else happens too. The days get shorter.

Anthocyanins, pigments that make purple and red, are something different all together. Not all trees produce anthocyanins. Those that do produce it only in fall.
Posted by Palmer at 8:12 AM No comments:

Choose your partners, one and all,
Aspirin, Advil, or Tylenol!

Now fling those covers with all you've got,
One minute cold, the next minute hot,

Circle right to the side of the bed,
Grab the tissues and Sudafed.

Forget about slippers, dash down the hall,
Toss your cookies in the shower stall.

Remember others on the brink;
Wash your hands; wash the sink.

Wipe the doorknob, light switch too,
By George, you've got the it, you're doing the Flu!

Source: Internet
Posted by Palmer at 1:53 PM No comments:

2. Click on your friend's profile and Wall text box or your status update box.

3. Press the "Num Lock" key on your keyboard and ensure that it is activated.

Posted by Palmer at 1:32 PM No comments:

Believe It Or Not

Recently, when I went to McDonald's I saw on the menu that you could have an order of 6, 9 or 20 Chicken McNuggets.

I asked for a half dozen nuggets. "We don't have half dozen nuggets", said the teenager at the counter. "You don't?" I replied. "We only have six, nine, or twenty,"
was the reply. "So I can't order a half-dozen nuggets, but I can order six?" "That's right." So I shook my head and ordered six McNuggets.

I was checking out at the local Foodland with just a few items and the lady behind me put her things on the belt close to mine. I picked up one of those dividers that they keep by the cash register and placed it between our things so they wouldn't get mixed. After the cashier had scanned all of my items, she picked up the divider, looking it all over for the bar code so she could scan it. Not finding the bar code she said to me "Do you know how much this is?" and I said to her "I've changed my mind, I don't think I'll buy that today". She said "OK" and I paid her for the things and left. She had no clue to what had just happened....

A lady at work was seen putting a credit card into her floppy drive and pulling it out very quickly. When inquired as to what she was doing, she said she was shopping on the Internet and they kept asking for a credit card number, so she was using the ATM "thingy".

I recently saw a distraught young lady weeping beside her car. "Do you need some help?" I asked. She replied, "I knew I should have replaced the battery to this remote door unlocker. Now I can't get into my car.
Do you think they (pointing to a distant convenience store) would have a battery to fit this?" "Hmmm, I don't know. Do you have an alarm too?" I asked. "No, just this remote thingy," she answered,
handing it and the car keys to me. As I took the key and manually unlocked the door, I replied, "Why don't you drive over there and check about the batteries? It's a long walk."

Several years ago, we had an Intern who was none too swift. One day she was typing and turned to a secretary and said, "I'm almost out of typing paper. What do I do?" "Just use copier paper," the secretary told her.
With that, the intern took her last remaining blank piece of paper, put it on the photocopier and proceeded to make five "blank" copies. ! ? !

I was in a car dealership a while ago, when a large motor home was towed into the garage. The front of the vehicle was in dire need of repair and the whole thing generally looked like an extra in "Twister". I asked the manager what had happened. He told me that the driver had set the cruise control and then went in the back to make a sandwich.

My neighbor works in the operations department in the central office of a large bank. Employees in the field call him when they have problems with their computers. One night he got a call from a woman in one of the branch banks who had this question: "I've got smoke coming from the back of my terminal. Do you guys have a fire downtown?"

Police in Radnor, Pennsylvania, interrogated a suspect by placing a metal colander on his head and connecting it with wires to a photocopy machine.

The message "He's lying" was placed in the copier, and police pressed the copy button each time they thought the suspect wasn't telling the truth. Believing the "lie detector" was working, the suspect confessed.

Source: Internet
Posted by Palmer at 5:30 AM No comments: