A vision of grandeur for the developing river metropolis at Memphis, the Gayoso House was built by Robertson Topp, a wealthy young planter. Topp was involved in the development of South Memphis, an area of houses, commercial buildings, and a hotel designed to grace the young city with high architectural style. He commissioned James Dakin, a founder of the American Institute of Architects, to design the structure, which was constructed in 1842. Its Greek Revival portico was easily recognizable from the river. In the late 1850s Topp continued his efforts to bring architectural distinction to Memphis, when the Cincinnati firm of Isaiah Rogers, designer of the Tremont House in Boston, contributed to an addition that almost doubled the Gayoso's original 150 rooms. The addition featured wrought-iron balconies overlooking the Mississippi; the supervising architect was James B. Cook, an Englishman who stayed in Memphis for the rest of his architectural career.
The Gayoso House became a Memphis landmark, an oasis of modern luxury frequented by travelers passing through the city by river, road, or rail. With its own waterworks, gasworks, bakeries, wine cellar, and sewer system, the hotel offered amenities far beyond those available to the rest of Memphis. The indoor plumbing included marble tubs and silver faucets as well as flush toilets.
The Gayoso House burned on July 4, 1899. To replace it, James B. Cook designed a new hotel. His U-shaped construction surrounded a courtyard screened from Front Street by a row of columns, which are no longer extant. Goldsmith's department store bought the hotel in 1948 and used it for offices and storage. Fifty years later, however, it was restored for use as downtown apartments, residences, restaurants, and offices.

From Wikipedia, the free encyclopedia 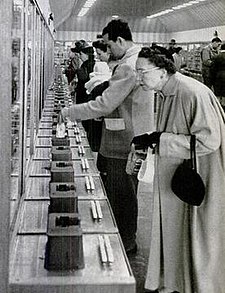 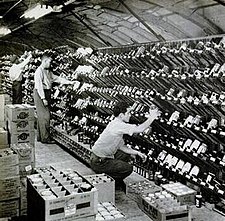 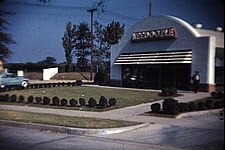 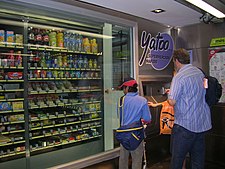 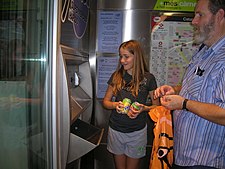 Automated grocery store in Barcelona metro 2006.
Keedoozle was the first fully automated grocery store in the United States, a vending machine concept developed by grocer Clarence Saunders in 1937.[1][2] It is often held that the name "Keedoozle" was coined by Saunders to refer to the technology used, in which a "Key Does All" for the grocery shopper,[3][4] but another interview with Saunders [5] appears to contradict this.
The Keedoozle concept was intended to be a grocery shopper labor-saving and cost-saving device.[2] These groceries were offered at a cost of 10% - 15% below the going rate.[6][7] The Keedoozle store sold mostly dry goods at a half a penny to three cents over cost.[4] Saunders developed this concept from his self-service Piggly Wiggly grocery store concept.[3]
Saunders' Keedoozle was a prototype for a store for automatic dispensing of groceries and registering the total cost at the pick up counter. Sample merchandise was displayed behind rows of little display cabinets of glass boxes. Shoppers selected their merchandise with a key given to them initially. Customers then put the key in labeled keyholes at the merchandise display and selected the quantity.[8]
Electric circuits caused perforations to be cut in a ticker tape attached to the face of the customer's key. The customer then took the punched out tape to the cashier for processing. The cashier would insert the tape into a reading mechanism that would electronically read it. That set off electrical and electronic circuits which started the goods sliding down conveyor belts and did the cost tallying in the process.[8]
The key-activated mechanism was not completely automated, however. Their groceries were hidden behind stockroom walls and refrigeration units. Stock personnel had put their selected items onto conveyor belts physically that in turn moved to the cashier for check out. A mechanism added up the tally for the customer's total bill. The shoppers picked up their groceries all wrapped up or boxed accordingly when they paid.[8]

The Keedoozle idea was too complicated, which led to its demise.  Contemporary technology was unable to handle the concept. Circuits got mixed up easily and shoppers got the wrong merchandise. The conveyor belt system was not capable of handling such a high traffic load, especially at peak times.
Another reason given for these failures was that it was too far ahead of the buying habits of the public. One quote from journal Automation in Marketing said that it was just too much for the average mind to grasp; too far in advance of the public thinking. Saunders received posthumously the 1958 U.S. Patent 2,820,591 for the Keedoozle technology concept.
The concept instead has evolved into the self checkout shopping environment. Historians say Saunders' concept was fifty years ahead of its time. Some say the concept could likely return. Automation in Marketing said that "the technology exists, and the mood in America is ripe for this concept."

Three Keedoozle stores total were built. The first Keedoozle store was opened in Memphis, Tennessee, on May 15, 1937, by the Keedoozle Corporation of which Saunders was president. This first store closed after a few months because the mechanical technology was not capable of handling the high traffic loads. This store reopened in 1939 in the same location but failed again for the same reason.
The third store built in 1948 was at the corner of Poplar and Union Extended in Memphis. It was open for a little over a year and also failed for the same reason as the first two attempts. This third and final store has since been torn down.